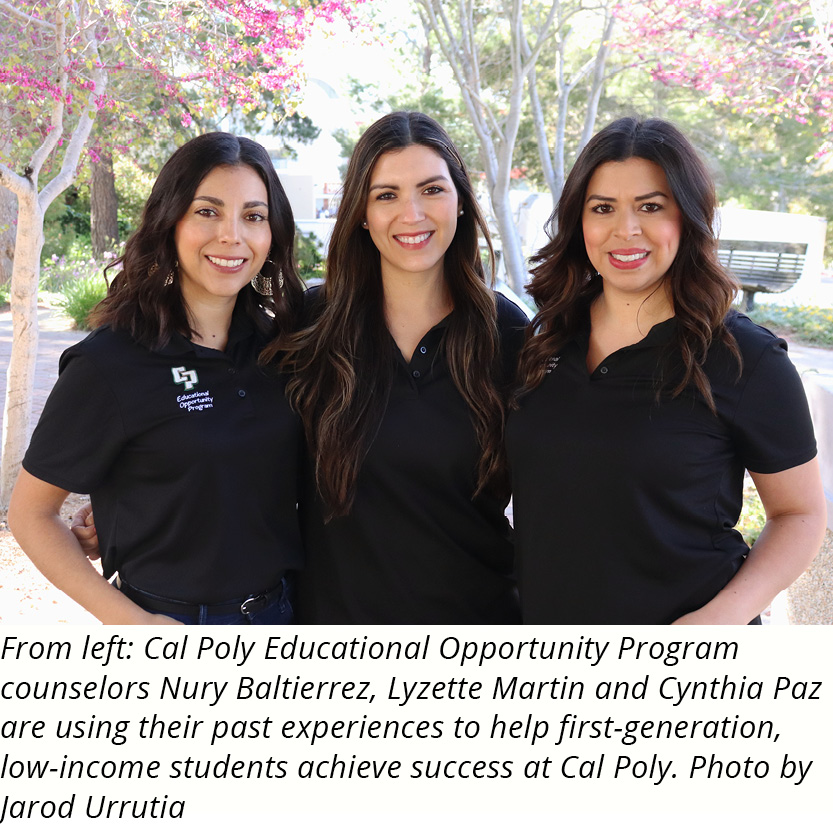 For the counselors in Cal Poly’s Educational Opportunity Program (EOP), serving first-generation, low-income students is more than a job. For them, it’s a personal commitment to serving their community, acknowledging their own roots, and providing the same opportunities they received during their academic careers.

“I was an EOP and first-generation student as an undergrad at Fresno State,” said EOP Counselor Lyzette Martin. “I can identify with some of the barriers that a lot of our students face during their college career here, but for the most part, it was the students that drove me to get this position. It’s giving back in a way to a lot of the staff that helped me along the way during my undergraduate career.”

“Not only do I identify with the first-generation community at Cal Poly, I also understand just how at-risk a lot of these low-income students are,” Baltierrez said. “I want to help them make a positive impact in their lives, like EOP did for me.”

Cal Poly’s EOP program was originally established in 1968 and is the oldest program of its kind in the California State University System. All told, the program aims to improve the access, retention and graduation rates of students who have been historically, economically or educationally disadvantaged. The program accomplishes this through a variety of counseling and transitional programs, including Summer Institute and Transfer Bridge, two summer programs that allow first-generation low-income students to meet with their Cal Poly peers for the first time.

Baltierrez noted that above all else, the program seeks to instill a sense of empowerment and community in every first-generation student it serves. To that end, she notes that the students ultimately create their own success through resilience and hard work.

“They are very ambitious and hard-working and they do have a tremendous drive to be successful, even though it is challenging to be in a new environment and culture,” Baltierrez said. “They endure a lot outside of school but they don’t give up – they succeed, which is incredibly rewarding for us as counselors.”

Martin, meanwhile, added that success begins with a community that’s there to support its members.

“Our main focus is social integration,” noted Martin. “We've seen how this leads to success academically, professionally, and personally. That’s really what drives all that we do.”

EOP Counselor Cynthia Paz noted that the ability to identify with the students they serve acts as both their driving force and source of their strength as mentors.

“I was working at a community college before coming here and most of the students were first-generation, low-income students,” said Paz. “Working for that population was very important to me because I understand the problems they can have as a low-income first-generation student myself.”

One central issue among the students Paz and her colleagues serve is balancing financial stability through work and their academic commitments at Cal Poly. Still, each student is different — with unique needs that require a case-by-case approach.

“My approach is starting where the student is at,” said Martin. “Every student is different and no appointment is the same. Some students are just starting out and the issue at hand is breaking down what it means to have office hours. For others who are farther along in their college career, it’s more about diving into career exploration.”

Paz, meanwhile, added that being proactive when meeting and working with students is key. Continuing to reach out to students throughout their careers helps the counselors understand new problems as they arise.

“For me, the practice and advising part is why I wanted to be in this position,” said Paz. “Looking at the student as a whole, at every aspect of what they're going through, and being proactive in following up to them — continually reaching out, checking up, and getting them to come back allows us to assess any new problems.”

At the end of the day, witnessing the transformation of their students from freshmen into seniors ready to enter the world is the most rewarding for the counselors, and the force that keeps them moving from student to student.

“I just live for getting to know students, hearing where they’re at, what they’re hoping to achieve and seeing them growing during their time here as students,” said Martin. “It’s really exciting to see them grow and get ready to go off into their jobs and careers.”

“It’s seeing where they started on that first stage as freshmen and that transformation they undergo until they graduate and beyond,” added Baltierrez. “You really get to see these students change as people.”