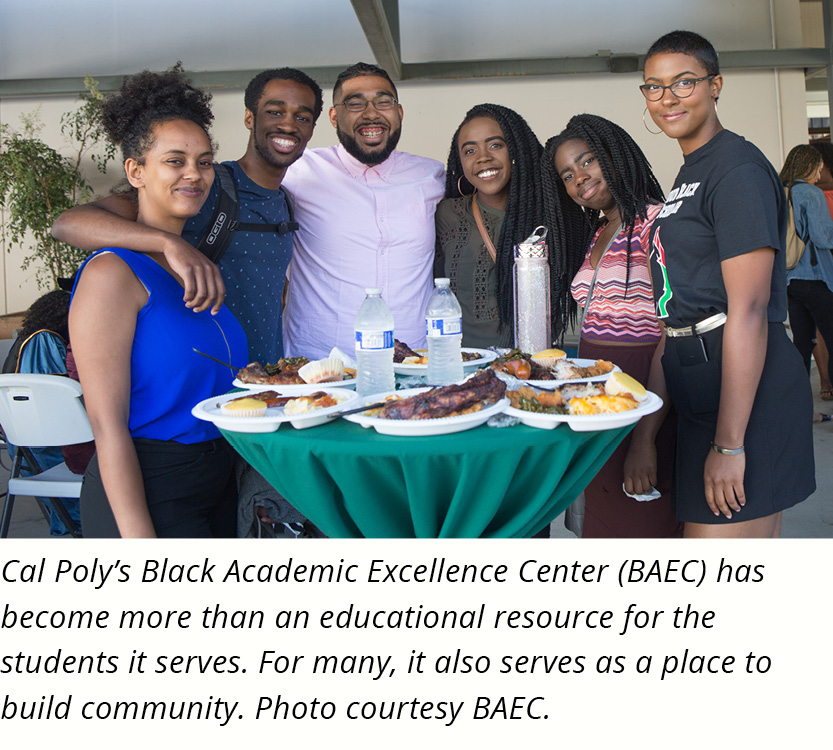 Steve Ross doesn’t mince words when it comes to describing the environment in the Black Academic Excellence Center (BAEC – pronounced “base”). He’s quick to point out that while everyone is welcome at the center, they should be prepared to hear about the African-American student experience.

“BAEC celebrates Black culture, thoughts, history, and ideas at Cal Poly,” said Ross, who serves as the center’s program coordinator. “The goal is not to create a space separate or isolated from the larger campus community, but to engage the campus community in dialogue through the lens of Black culture and identity.”

Valentina Stafford, a fourth-year student with a double major in Kinesiology and Ethnic Studies, noted that BAEC helped change her perspective about Cal Poly and gave her an on-campus community to call her own.

Stafford was on the verge of leaving Cal Poly because she had trouble finding her group of friends during her freshman year. A friend from her hometown in Illinois then introduced her to BAEC. Still, she admitted feeling hesitant at first about entering the center.

“The thing you have to remember is that it’s the Black Academic Excellence Center. Anyone who enters that space, they need to know that it’s a very special space because it’s a small community,” said Stafford, who identifies as Latina. “I didn’t want to overstep my boundaries. But the reason I feel comfortable here is because everywhere I’ve lived, it’s always been very diverse.”

A home away from home 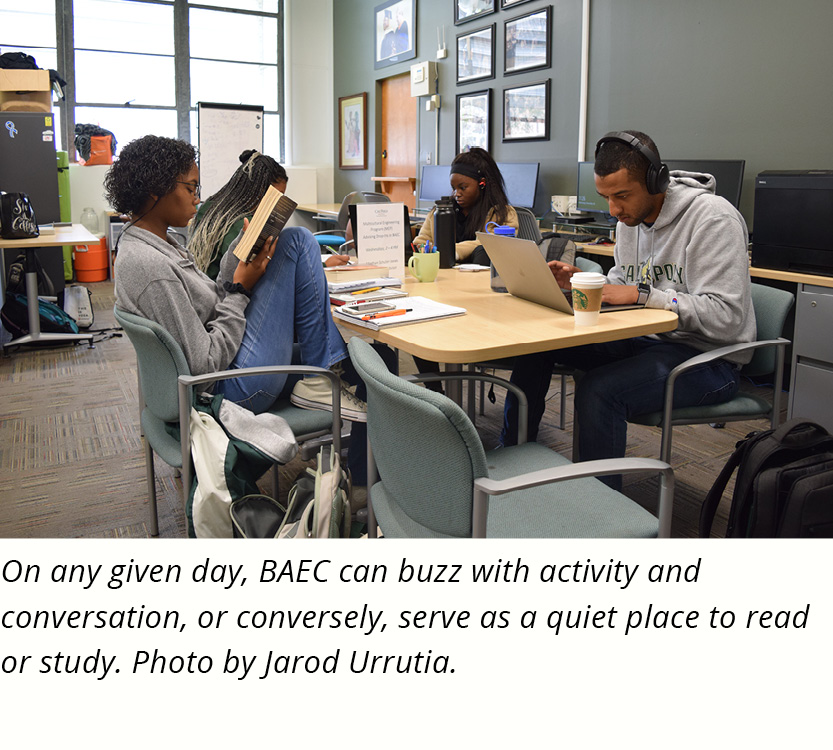 While BAEC originally began as a source of academic support for African-American students, it has since morphed into much more.

Academically, the center offers a wide range of support services to help students navigate college, including workshops on resume and cover letter writing, handling stress, time management and more. In addition, the center provides personal and academic advising and a computer lab, and it hosts monthly “couch conversations” to build stronger relationships between students and faculty members, among other efforts.

More than that, however, the center is a social hub for African-American students and their peers. On any given day, Ross noted, the center will bustle with the sights and sounds of students talking, eating lunch together or simply joking around. The center also regularly hosts social events like bowling, movie nights and Kwanzaa celebrations, among others.

“After a long day of classes or studying, the first place I go to destress is BAEC,” said Gabby Cole, a fourth-year biomedical engineering student. “The best part is that you never know what you're walking into. Sometimes, it's the perfect study environment. The next time, there's a debate going on about last night's game, the season finale of Insecure, or even as personal as exchanging stories about our diverse backgrounds and heritages.”

Stafford said she’s seen that community pull together in times of need too, whether it’s a family tragedy or everyday issues like advising younger students on class schedules and professors.

“I always feel like there’s support there – you can’t get that anywhere else,” she said.

Connections to culture and identity

Social hub aside, the center also strives to infuse black culture into the learning and social aspects of the center. For instance, the center has a library of more than 250 books on the civil rights movement, African culture, and fiction and non-fiction novels by African-American authors.

Fourth-year history major Jerod Adams said the center and its community of peers have helped him gain a greater understanding of his culture and his identity. Adams, a Los Angeles native, was first introduced to BAEC by his friend and resident assistant. 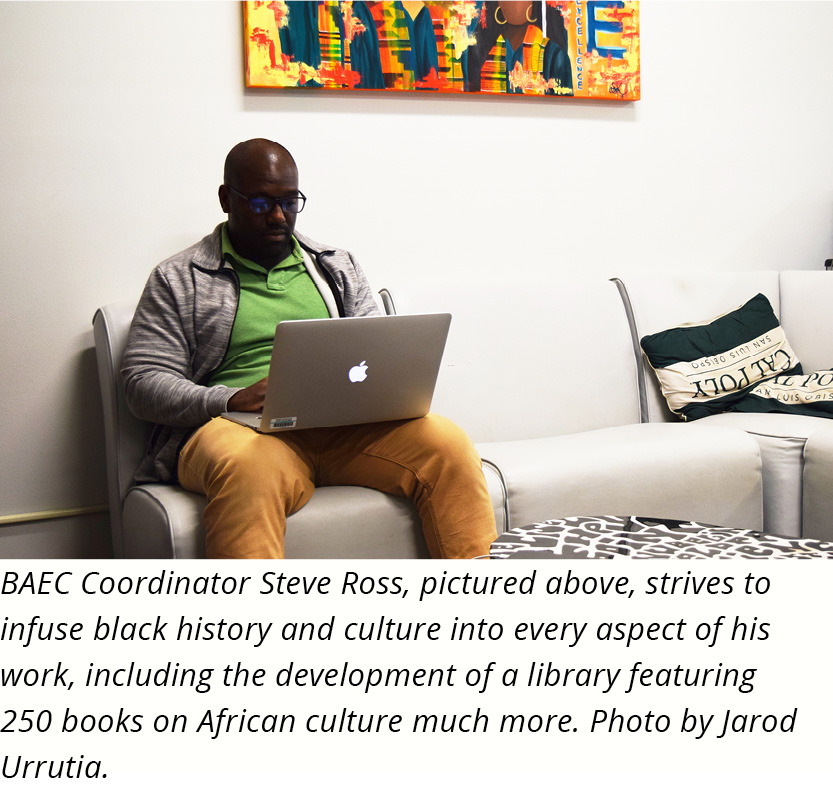 “I told him that I was having problems when it came to being black at Cal Poly and dealing with my identity on campus,” Adams said. “BAEC has helped me find friends who have become my family and who can go to with my struggles. Being a part of BAEC has helped me stay at Poly and understand how I can express my culture.”

Ross (pictured right) also seeks to add culture in his role as an organizer for Cal Poly’s annual Black Commencement. Each year, the ceremony features the singing of the black national anthem, “Lift Every Voice and Sing,” along with speeches by former Cal Poly graduates, a keynote address, and its traditional rite of passage ritual. Each graduate also receives a Ghanian kente cloth, purchased by retired College of Science and Mathematics Dean Philip Bailey.

Stafford, meanwhile, offered some simple advice for those hesitant to try out the center: Just do it.

“You can have a great time and meet amazing people – people who have shaped my time at Cal Poly,” she said. “So, go in there because you never know how it could change your life.”

In 2006, Dr. Lori Patton Davis of Iowa State University explored the importance of black cultural centers (BCC) and why they mattered to African-American students. Read more...