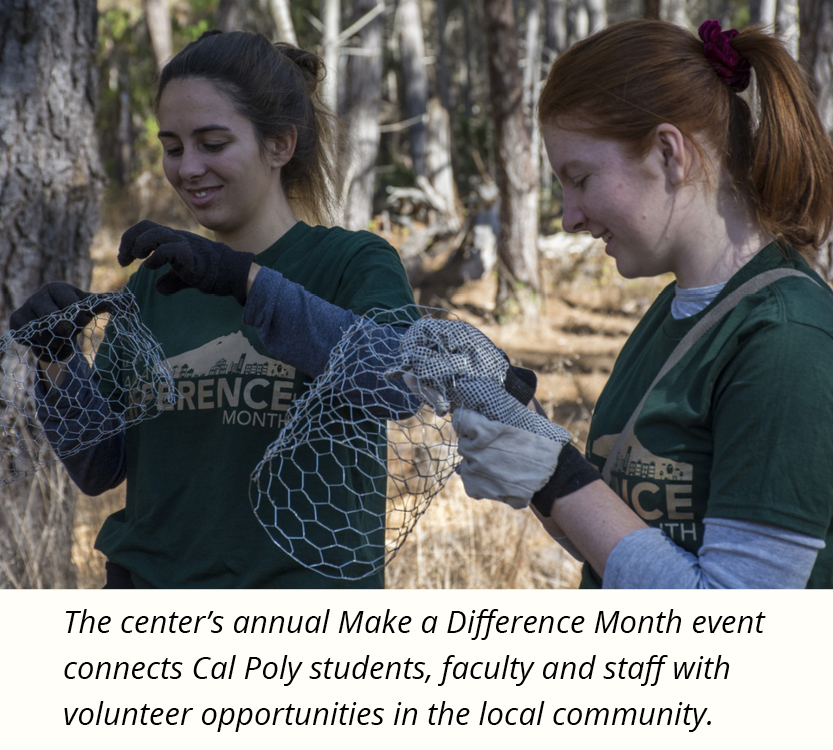 For Cal Poly community members seeking a more meaningful way to contribute to the San Luis Obispo community – or simply to create connections with like-minded individuals – there’s the Center for Service in Action (CSA).

The center connects students with local and out-of-area service opportunities through six programs, as well as annual events such as Change the Status Quo and Make-a-Difference Month. The center originally started as a California State University (CSU) chancellor’s office initiative in 1972 and has seen its impact and community-building grow since, both in the surrounding community and among students themselves.

Class of 2019 graduate and current CSA AmeriCorps VIP member, Nicholette Maraccini, was one of 783 students who contributed 6,384 total service hours in the fall of 2018. She was motivated to volunteer through the center’s Student Community Services program because of her interest in giving back to the community. One of her favorite events was serving breakfast at the Prado Day Center, which provides services to the homeless population of San Luis Obispo County.

“I thought that was a cool experience, because we get to see the people we were serving and interact with them, whereas other times, it’s more just behind the scenes,” said Maraccini, who called the experience extremely rewarding.

Bradley Kyker, senior coordinator for the Center for Service in Action, noted that San Luis Obispo County is unique because it has the highest number of nonprofit agencies, per capita, of any county in the state, with the exception of Santa Barbara County. The center alone has more than 300 community partnership with local nonprofits, which means there’s a heavy reliance on Cal Poly students for service hours.

“Per capita, San Luis Obispo has an enormous number of nonprofit agencies. It’s kind of crazy. They are thick on the ground,” said Kyker. “We’re a relatively small community, so most of (the nonprofits) operate on a shoestring budget.”

“Student volunteers bring such a great benefit and are really key to keeping nonprofits afloat so that they can extend service to the folks in our community who really need it,” added Kyker.

That includes the impactful work of Cal Poly student volunteers at local homeless shelters, which often need overnight chaperones but don’t always have the budget to pay staff. Instead, these roles are filled by volunteers from Cal Poly.

“Cal Poly students are a huge reason that the homeless shelters are able to operate in the evenings,” noted Megan Rivoire, coordinator for the Center for Service in Action. 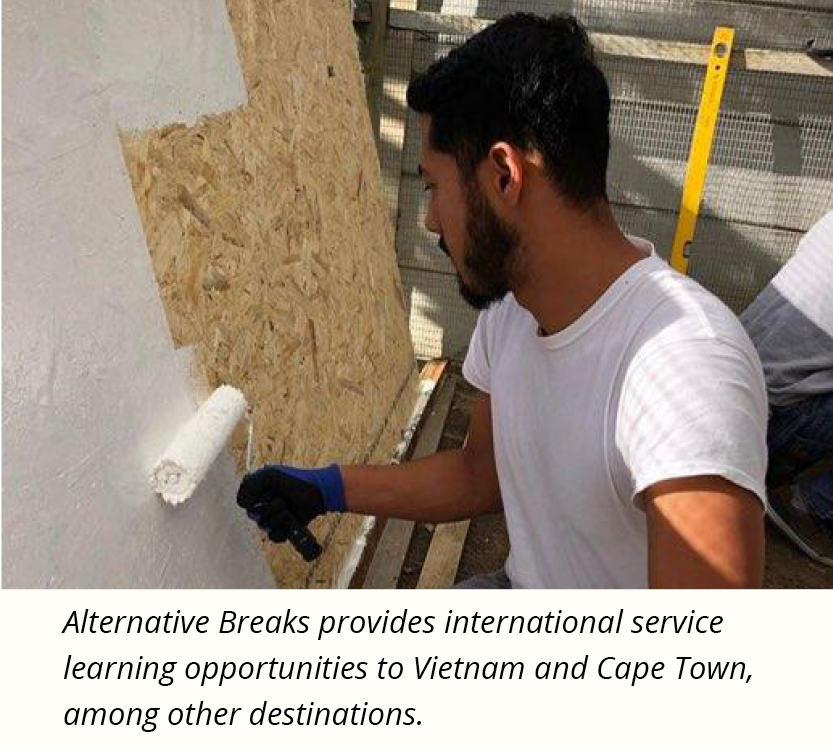 Some students noted that their volunteer experiences helped shape their own understanding of diversity, social responsibility, and leadership – something Kyker describes as “the light coming on.”

Class of 2019 graduate Sam Phillips, for one, said the center helped her find her voice on social issues.

“I would say it definitely helped teach me when to speak up,” Phillips noted. “I don’t love speaking up necessarily, but when something is not right, I have a bigger perspective on that — and the ability to do something.”

In addition, the center allows students to experience culture and service learning outside of San Luis Obispo County through its Alternative Breaks program, which hosted service opportunities in New Orleans, New York, South Africa, and Vietnam, among other cities domestically and internationally, during the 2018-19 academic year. This year, the program will host service opportunities in New Orleans, Seattle, Italy and Nepal.

Third-year Environmental Engineering student Ava Mattis participated in a week-long Alternative Breaks trip to New Orleans during her 2017 winter break and noted that the experience helped her recognize the vital role of community service. In turn, she sought out additional community service opportunities upon her return to Cal Poly.

“The trip really helped me understand that community service may not be glamorous or make a dramatic difference, but it is necessary to help organizations run,” said Mattis. “Everyone needs to play their small little part to make things better for everyone.”

Beyond her contributions as a volunteer, Mattis said her Alternative Breaks experience taught her about diverse communities, allowed her to engage in thought-provoking conversations – and ultimately, helped raise her awareness of social justice issues.

“You will make a small difference in the community you serve, but the place and the people you encounter there will have a much larger impact on you than you did on them,” she said.

A sense of belonging

The center also serves as a place where students with similar interests can connect and build their own community, according to Phillips.

“I like being with people who also enjoy volunteering,” she said. “The people I meet while volunteering are the people I enjoy hanging out with. I’ve made a lot of my good friendships through volunteering and through the service.”

That sentiment holds true for Mattis as well.

“I built so many wonderful friendships and grew deeper connections with other students upon returning to Cal Poly,” she noted.

As for Phillips, the center represents a perfect balance – being able to make a difference in other people’s lives and finding a place of your own at Cal Poly.

Interested in supporting the Center for Service in Action? Make an online gift today!