Ulises Graciano wasn’t sure what to expect when he first learned that he would be living in yakʔitʸutʸu, Cal Poly’s new first-year housing community. All he knew at the time was that he would be moving into a community like no other, with residence halls named in tiłhini, the language of the yak titʸu titʸu yak tiłhini tribe, San Luis Obispo’s Indigenous people.

One quarter into his first year residing in yakʔitʸutʸu, the first-year political science major said the experience has been positive. 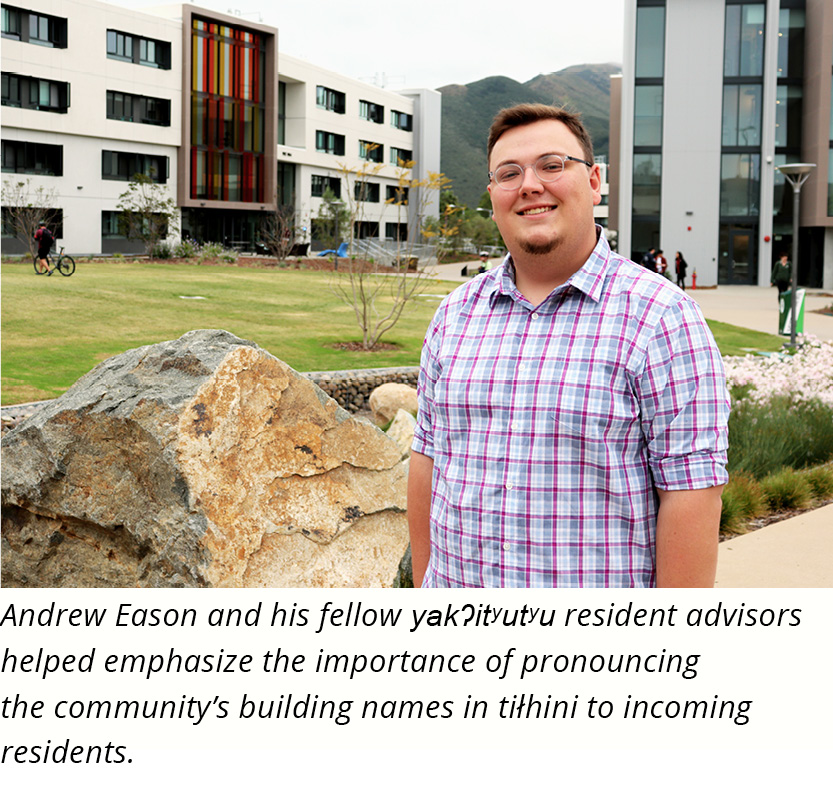 For the students who call yakʔitʸutʸu their home, there’s much more to the community than just its shiny new features. For them, it’s about actively embracing and learning about the tribe’s culture and language – and encouraging others to do the same.

Of course, integrating a new language into everyday conversations comes with a learning curve.

Some students, like fourth-year english major Annemarie Sohn, said they initially felt hesitant about the effort. In particular, Sohn admitted that she was worried about students misusing the names and disrespecting the culture.

“Students are young still, and are capable of being very immature,” she noted.

Some residents of the yakʔitʸutʸu community also felt apprehensive, albeit for slightly different reasons.

Krystal Bacon, a second-year architectural engineering student and resident advisor (RA) at tšɨłkukunɨtš, said that she was nervous about using the tiłhini names regularly. She quickly realized, however, that it’s not necessarily about getting it right – it’s about making an effort.

“I wanted to make sure I could pronounce them even before I tried [using them in conversations], but it’s not about that,” Bacon said. “You’re supposed to be trying the entire time and it’s okay if you don’t get it right the first time. Once you do get [the names] down, you feel more comfortable saying them and you want everyone else to say them correctly.”

With that in mind, yakʔitʸutʸu RAs led by example, emphasizing the importance of using the building names correctly out of respect for the tribe. Andrew Eason (pictured above), a fourth-year theatre major and RA at tsɨtpxatu, noted that his fellow RAs set aside time with incoming students to walk through the pronunciations of the different buildings.

“We came in really strong with our abilities to use the names,” added Eason.

Graciano, for one, appreciated that extra attention to detail.

“In the beginning, I had to ask for clarification a lot, but now I know where all of them are located and I know the different names. If you put in the effort, it becomes easier,” he said.

“Now, if anyone tries to abbreviate, someone’s usually saying, ‘pronounce the whole name,’” Graciano added. “Everyone keeps each other accountable, for the most part.” 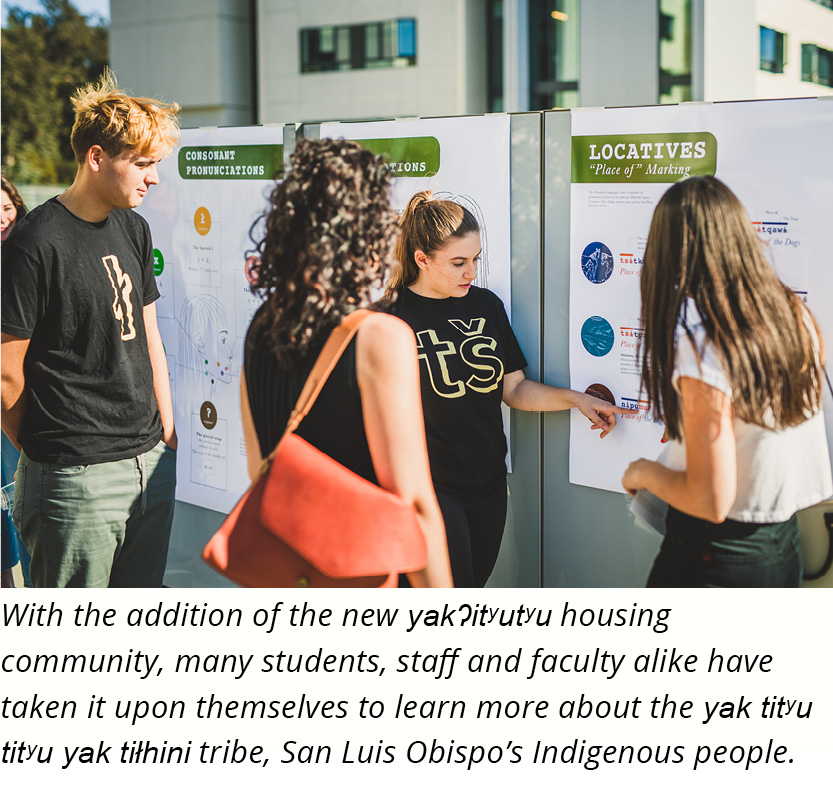 In addition to the university’s partnership with the tribe, members of Cal Poly’s faculty have teamed up with tribal members to help reawaken the tiłhini language, which has been mostly dormant for more than 100 years. Now, students are using the language throughout Cal Poly’s campus daily – as will future generations of Mustangs.

“It’s really cool that the tribe and Cal Poly came together to create something like this,” Graciano said. “It’s really well thought out and it’s made me appreciate their effort, as well as the purpose and meaning behind it.”

“It’s important because it is an entire culture that we’re representing,” Bacon added.

For Sohn, meanwhile, the experience has heightened her awareness of history and the land she’s on – whether it’s at Cal Poly or elsewhere.

“I would’ve never questioned whose land I’m on before, but after learning that we are on Chumash territory, it made me want to look up where my hometown land was on,” she said.

In true Learn by Doing fashion, others have also taken it upon themselves to teach their peers about tribe culture and language.

“I have one resident already who asked me if he could lead a phonetics workshop pronouncing the names correctly and what the symbols mean, what the words mean, all that stuff,” said Bacon. “It makes me feel good that I was able to pass on the excitement to them.”