For one student, Cal Poly Cares provided a roof over his head – and peace of mind 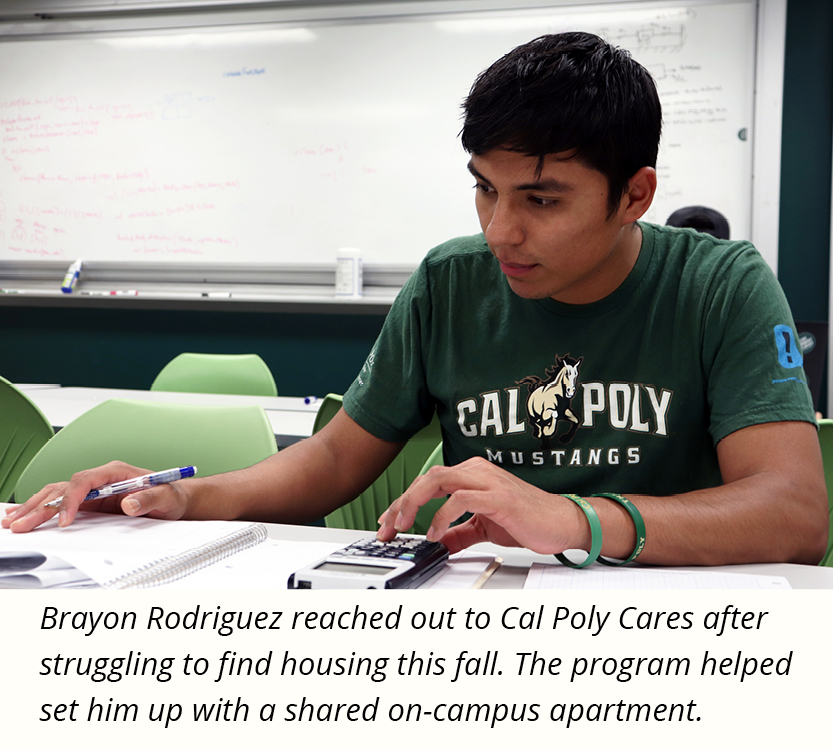 Brayon Rodriguez was on the verge of a crisis.

A fifth-year student set to graduate later this fall, Rodriguez couldn’t secure the housing he needed, despite searching as early as spring and throughout the summer. Two weeks prior to the start of the fall quarter, Rodriguez still had no resolution – and was starting to feel desperate.

“It's just really difficult for someone in my position to find something that's affordable, close to campus and within the dates I would have been here at Cal Poly,” said Rodriguez of his search for off-campus housing. “It’s my last quarter, and most places don't offer a short-term lease.”

With few options left, Rodriguez thought about the possibility of couch-surfing with various friends – or even sleeping in his car.

“It was definitely nerve wracking,” Rodriguez said. “I would have ended up crashing on a friend’s couch. I’ve heard stories of people sleeping in the library and showering in the (recreation center). It might have come to that — it would've been a last resort, but at the time I was definitely open to it.”

That’s when a friend told him about Cal Poly Cares. The program, which started in 2015, provides students with one-time grants for unexpected financial emergencies. This includes academic materials, meals, clothing, grants, and — as in Rodriguez’s case — housing. In 2018, the family of late Cal Poly alumnus Donald Tanklage (class of 1957) generously gave a $150,000 gift to Cal Poly Cares that helps students like Rodriguez find the housing they need to persist.

“Cal Poly Cares can have a significant impact on a student's ability to be successful, especially when that student is at risk of being homeless,” said Joy Pedersen, an associate dean of students who manages the program.

Within a day of submitting his application, the program reached out to Rodriguez and provided a room in Poly Canyon Village to cover the duration of his fall 2019 quarter.

“It was two weeks before class and I had no luck finding anything,” Rodriguez said. “So I reached out to the people in the program, and they got back to me really quickly. They offered to help me with my circumstances and everything.”

Pedersen noted that approximately 30 percent of the Cal Poly Cares applications she receives are for housing assistance.

The struggle to find and afford off-campus housing can be a significant burden for some students, Rodriguez added.

“Housing in SLO has always been really expensive,” Rodriguez said. “I don’t think it’s an issue for the majority of students, but for people like me who come from low-income backgrounds, it's a different story.”

Aside from cost and lease terms, living close to campus was also a major consideration for Rodriguez. To that end, he said living on-campus has been a positive experience.

“I like the (campus) housing I was given a lot,” Rodriguez said. “My biggest factor with housing was proximity to campus, so I don't have to drive or walk long distances.”

A Sigh of Relief

Rodriguez noted that perhaps the best part of resolving his housing situation through Cal Poly Cares is that he no longer spends time and energy worrying about it. Instead, he’s simply placing his attention where it should be: finishing up his final quarter and graduating.

“Securing that housing was a breath of fresh air – it was a huge weight off my shoulders,” Rodriguez said. “It was honestly one of the best feelings I've ever felt in my life.”

He’s also thankful for the help he received from Cal Poly Cares – and would recommend seeking help from the program to other students in need.

“I feel like it slips under the radar a lot that Cal Poly has programs like this,” he said. “I think it's just a matter of seeking help when you need it, and Cal Poly will definitely be there for its students.”

Interested in helping students who depend on programs like Cal Poly Cares? You can make a tremendous difference in their lives today with a gift to the Campaign for Student Care.