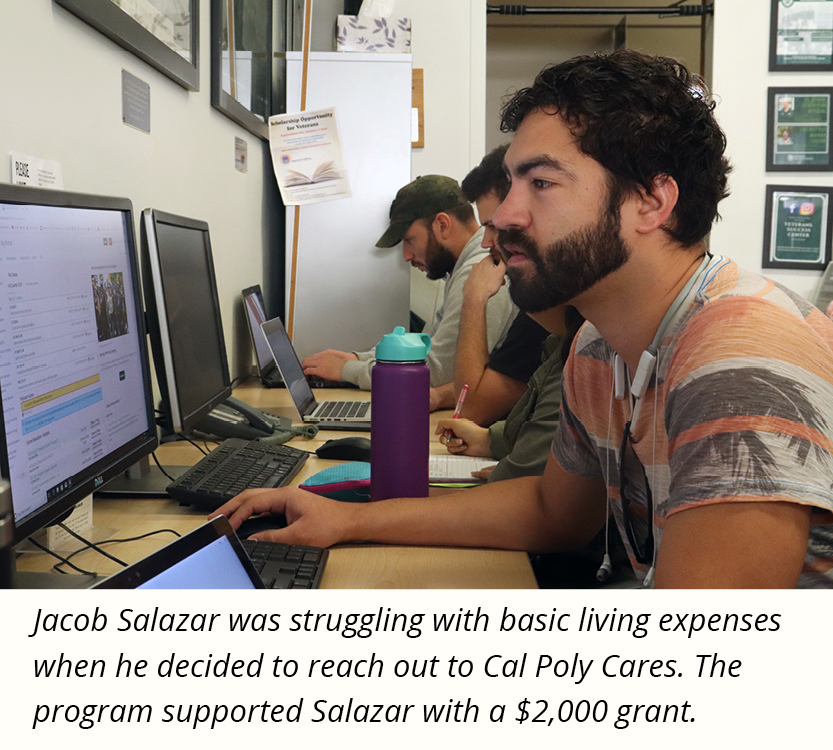 As a former nuclear electrician for the U.S. Navy, Jacob Salazar is accustomed to preparing for unforeseen circumstances. Preparing for his return to Cal Poly in 2017 proved to be an altogether challenge, however.

“When I first moved here I grossly miscalculated expenses and how much I’d have coming in from the G.I. Bill,” said Salazar, 31, who initially attended Cal Poly right out of high school before putting his education on pause to serve his country. “When I first got here, I declined the financial aid that was offered and I thought I'd be good. School started and I quickly realized that would not be the case at all.”

Suddenly short on money for even the most basic living expenses, Salazar found a Cal Poly Cares flyer pinned to the bulletin board at the Veteran’s Success Center. The program, which was established in 2015 through a generous gift from Cal Poly Foundation Board members, provides one-time grants of up to $2,000 for students struggling to afford housing, academic materials, meals and clothing, and other living expenses.

Salazar wasted little time and filled out the program’s online application. Within a couple of days, the program reached out and let him know that he qualified to receive a grant of $2,000, enough to support his living expenses — namely food and utilities — for the remainder of his first quarter back at Cal Poly.

“As many students know, school can be pretty stressful,” Salazar said. “Most (students) have enough stress, enough on their plates already. It’s just so much better when you don’t have to worry about basic needs. The fact that this resource was available to me just alleviated my burden. It was one less thing to worry about.”

The Right Support at the Right Time

It was already a difficult adjustment for Salazar, who exchanged months of living underwater in a Navy submarine that cruised the Pacific Ocean for the life of a full-time Cal Poly student.

“I was still adjusting to civilian life, adjusting to living in a city I haven’t been to in years,” said Salazar, who was stationed in South Carolina, New York, and Washington during his Navy service. “New place to live in, new routines in school, and I hadn’t gone to school in 12 years.”

Kari Leslie, who serves as the coordinator for Cal Poly’s Veterans Success Center, noted that Salazar’s situation isn’t unique among veterans and veteran dependents attending Cal Poly. She added that while the Post 9/11 G.I. Bill generally offers 36 months of federal benefits for housing and living expenses, students at Cal Poly receive a smaller sum than other regions – between $1,700 to $2,000 per month. In addition, students only receive benefits when the university is in session, not during holiday or summer breaks.

“Overwhelmingly, the largest issue that military-connected students at Cal Poly face is food and housing insecurity,” said Leslie. “They’re struggling to make ends meet because it’s such a high-cost area.”

“Every year, Cal Poly Cares supports a number of non-traditional students who often do not have any other resources to address unexpected expenses,” added Associate Dean of Students Joy Pedersen, who has overseen the program since its inception.

Salazar noted that he wants to encourage other students to utilize available resources like Cal Poly Cares too.

“A lot of people, myself included, there’s always that immediate hesitation because you don’t want to ask for help,” said Salazar, who is on track to graduate in Spring 2021. “I empathize with people who encounter tough situations – because I’ve been there. I don’t think anybody has gone anywhere without a little bit of assistance.”

Interested in helping students who depend on programs like Cal Poly Cares? You can make a tremendous difference in their lives today with a gift to the Campaign for Student Care.